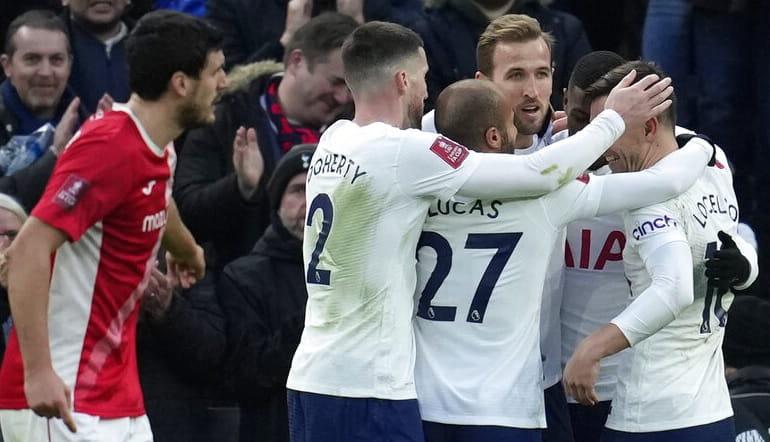 Join us here at 888sport as we look at the best FA Cup tips and predictions through each round in the race to reach Wembley.

We've had you covered with FA Cup predictions and tips throughout the season and we've even got outright FA Cup winner tips well in advance of the famous Wembley showpiece.

FA Cup betting odds have Manchester City as early favourites but the chasing pack will be hoping to oust Pep Guardiola's side in the battle to lift English football's oldest club competition.

Without further ado, it is time to check out our FA Cup prediction tips ahead of every round in the 2021/22 season.

It hasn’t been the best of weeks for Man United but the Red Devils can secure their place in the FA Cup fifth round draw when they host Middlesbrough on Friday night.

The 20-time English champions have failed to inspire confidence in recent games but United should prove too strong as they welcome lower league opposition to Old Trafford.

Currently sixth in the Championship table, Middlesbrough are no slouches and there will be plenty of fans heading down the motorway in anticipation of a famous FA Cup upset.

Romantics will be hoping for a shock Boro win but United should prove too strong on home turf and sports betting fans should back the Reds to prevail.

Are Tottenham going to go full strength in the FA Cup this season or will Antonio Conte opt to prioritise fighting for a Premier League top four finish?

It’s a roll of the dice for football fans punters here – Conte won the competition as Chelsea manager in 2018 but he may use this as a chance to rest the first team.

With that in mind, it might be worth chancing Brighton on Saturday night. The Seagulls have been sublime so far this season and the prices look wrong.

Brighton will relish taking on the role of the underdog. We’re fancying a Graham Potter masterclass at the Tottenham Hotspur Stadium…

The FA Cup is the oldest and most prestigious competition in world football, with millions of fans around the world tuning in each year to see which team lifts the famous trophy.

Punters can find the latest FA Cup betting odds ahead of each round here at 888sport – and the outright winner market will change drastically throughout the tournament.

One of the main reasons for that is due to the uncertainty of the FA Cup draw. As is the case with all cup competitions, the draw has a major impact on results.

From the best FA Cup facts to the competition's greatest moments, this tournament has a unique affinity with football supporters across the land. While greater emphasis is now placed on Europe, the FA Cup remains one of the top targets for the biggest clubs in England.

The ‘David vs Goliath’ nature of the FA Cup is what grips viewers and we’ve seen many ‘cupsets’ over the years, none bigger than Hereford United’s victory over Newcastle United in 1972.

FA Cup predictions can be made at any stage of the season, with the general outlook of the competition changing with each round and FA Cup result.

Find the latest FA Cup draw, fixtures and results information on the 888sport website ahead of each round. Every match is vital in the race to reach Wembley Stadium.

The FA Cup is one of the competitions that every supporter wants to win. While the magic of the cup has waned in recent times, it is still important to football fans across the country.

Punters can find the best FA Cup betting tips and odds here at 888sport throughout the competition. Who will be celebrating at Wembley Stadium in May? Only time will tell...

Our football betting experts are here with the best FA Cup tips for today. With the likes of Manchester United, Liverpool and Arsenal prominent in FA Cup betting, the top Premier League clubs are in the mix for success.